Circa 1867 - The history of the Spooner family began when the Reverend Alden Bradford Spooner I settled his family on 150 acres of government land, 3.5 miles up Torro Creek, north of the small coastal town of Morro in San Luis Obispo County, California - moved his family into a tent; within a month their house was ready for occupation.

The Spooner family consisted of the A. B. Spooner I, his wife, Roxana Gilmore, and four children, A.B II, Nettie, David, and Edith. 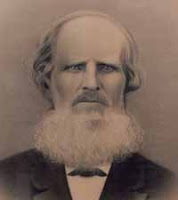 Circa 1860 - Armed with ordination papers Spooner took his family, by way of the Isthmus of Panama, to San Francisco. From there he preached his way through Crescent City, Portland Oregon, Rohnerville in Humboldt Co., and Chico. His final destination was San Luis Obispo County.

1870 - Rented the Torro Creek property to eldest son, Alden II. Moved into the town of Morro; became the town constable. "From then on he became the local preacher not only of Morro but any place that needed him. He farmed and he piloted boats in and out of Morro Bay." (Coast Beacon, 3/12/59)

In a diary entry he described the town of Morro, "Morro City....is a small town yet of only about 15 houses. One store kept by Mr. Stuart; One corner kept by a widow woman; One Boarding house kept by myself; Two Saloons - is not that awful - May the good Lord have mercy on us."

1877 - February 5th - The last entry in his diary read, "Feb 5th dawned dark and squally." Rev. Spooner went out in his small boat to pilot into the harbor the steam ship, "Mary Taylor." His body was never found.

1877 - March 3rd - Spooner's estate - From the Probate Court of the County of San Luis Obispo, State of California. "The total value of the A.B. Spooner I estate, including one cow, one lumber wagon, one harrow, and a chest of tools, totaled $1,249." His estate was left to his wife.

To give the reader a sense of Rev. Spooner the man, I am including entries from his diary.
The diary entries are exactly as written.

"At Home on Torro Creek 1872 the Case of Talbot Recorded
Feb. 13th 9 A.M. left home to go and conduct the funeral services of old Mrs. Rector, 92 years old the day before she died, returned at 1 P.M.  Called at Brother Smiths who told or informed me that Mr. Talbot had taken forceable possession of of a portion of my land so I had Brother Smith and Almond Stowel go with me and found him on the spot where his lumber was.  I informed him that he was on my land and ordered him to leave and not disturb my property in the presence of the two above name witnesses.

Feb. 14th at 8 A.M. left home to go over on Old Creek to perform the burial service of Mrs. Swain who died the day before, leaving 6 children, buried at 10:30 A.M. or finished at 11 A.M. after which went to Brother Clarks and took lunch at 12:30 P.M.  Left for home arrived about 1:30 P.M.  At about 2 P.M. Mr, Talbot came on to my place with a load of lumber.  I stopped him and after giving him all the information I could to satisfy him that he had no right to pass over my improvements he went back.  One cow died.

Feb. 15th Mr. Talbot arrived with a horse team, two men and wagon loaded with lumber.  At home on Torro Creek 1872 the case of Talbot recorded.  I forbid him crossing my lines.  He unloaded his lumber on some vacant land next to my land and went back.  At 10 A.M. Mr. Talbot came again with the same two men, Mr Brown and Mr. Kester with a span of horses dragging lumber over my north line.  I ordered him to stop and not to build or make any improvements on my land.  He refused to leave but went on building a small house 10 by 12 feet.

At 12 P.M. left home for San Luis Obispo.  Stopped a short time at Mr. Stanleys and went on.  Arrived about 5 P.M.  Stopped at Dr. McColoms a while, went home with Mr. Slack and stopped over night.

Feb. 7th at 2 P.M. Mr. Rudsel the Constable of this Moro Precinct served the notice on Mr. Talbot to leave my claim.  Mr. Talbot agreed to do so in the presence of 5 witnesses names, William Rondsel, Mr. Yates Jasper, Kester Roberts Brown, Alden B. Spooner my eldest son, and myself.  I then left for San Luis Obispo at 3 P.M. arrived at 7 P.M.  Attended Lodge.  Stopped with Brother Penilton."
(to be continued)